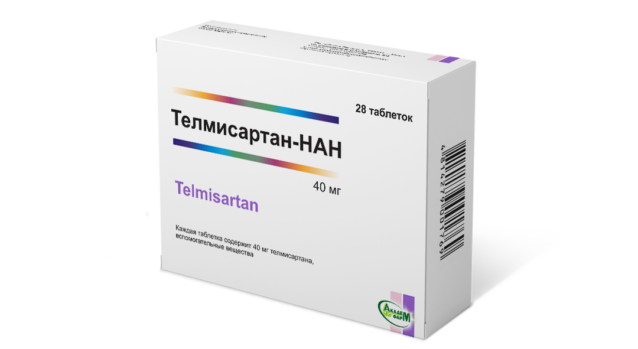 White or off-white oval biconvex tablets scored on one side; marbling is acceptable.

In human, an 80 mg dose of telmisartan almost completely inhibits the angiotensin II evoked blood pressure increase. The inhibitory effect is maintained over 24 hours and still measurable up to 48 hours.

Treatment of essential hypertension
After the first dose of telmisartan, the antihypertensive activity gradually becomes evident within 3 hours. The maximum reduction in blood pressure is generally attained 4 to 8 weeks after the start of treatment and is sustained during long-term therapy.

The antihypertensive effect persists constantly over 24 hours after dosing and includes the last 4 hours before the next dose as shown by ambulatory blood pressure measurements. This is confirmed by trough to peak ratios consistently above 80% seen after doses of 40 and 80 mg of telmisartan in placebo controlled clinical studies. There is an apparent trend to a dose relationship to a time to recovery of baseline systolic blood pressure (SBP). In this respect data concerning diastolic blood pressure (DBP) are inconsistent.

In patients with hypertension telmisartan reduces both systolic and diastolic blood pressure without affecting pulse rate. The contribution of Telmisartan-NAN’s diuretic and natriuretic effect to its hypotensive activity has still to be defined. The antihypertensive efficacy of telmisartan is comparable to that of agents representative of other classes of antihypertensive medicinal products (demonstrated in clinical trials comparing telmisartan to amlodipine, atenolol, enalapril, hydrochlorothiazide, and lisinopril).

Upon abrupt cessation of treatment with telmisartan, blood pressure gradually returns to pre-treatment values over a period of several days without evidence of rebound hypertension.
The incidence of dry cough was significantly lower in patients treated with telmisartan than in those given angiotensin converting enzyme inhibitors in clinical trials directly comparing the two antihypertensive treatments.

Tablets should be taken orally once daily with a sufficient amount of chilled boiled water, with or without food.

Warnings and precautions
Telmisartan-NAN should be kept in the sealed blister due to the hygroscopic property of the tablets. Tablets should be taken out of the blister shortly before administration.

Treatment of hypertension
The usually effective dose is 40 mg once daily. Some patients may already benefit at a daily dose of 20 mg. The tablet can be divided into two equal parts. In cases where the target blood pressure is not achieved, the dose of telmisartan can be increased to a maximum of 80 mg once daily.
Alternatively, telmisartan may be used in combination with thiazide-type diuretics such as hydrochlorothiazide, which has been shown to have an additive blood pressure lowering effect with telmisartan. When considering raising the dose, it must be borne in mind that the maximum antihypertensive effect is generally attained four to eight weeks after the start of treatment.

Skipping a subsequent intake
If you forget to take Telmisartan-NAN do not take double dose to make up for a forgotten tablet, take your next dose at its usual time.

Serious adverse reactions include anaphylactic reaction and angioedema which may occur rarely (≥ 1/10,000 to < 1/1,000), and acute renal failure. The overall incidence of adverse reactions reported with telmisartan was usually comparable to placebo (41.4% vs 43.9%) in placebo-controlled trials in patients treated for hypertension. The incidence of adverse reactions was not dose related and showed no correlation with gender, age or race of the patients. The safety profile of telmisartan in patients treated for the reduction of cardiovascular morbidity was consistent with that obtained in hypertensive patients. The adverse reactions listed below have been accumulated from controlled clinical trials in patients treated for hypertension and from post-marketing reports. The listing also takes into account serious adverse reactions and adverse reactions leading to discontinuation reported in three clinical long-term studies including 21,642 patients treated with telmisartan for the reduction of cardiovascular morbidity for up to six years. The incidence of adverse events: very common (≥ 1/10); common (≥ 1/100, but < 1/10); uncommon (≥ 1/1000, but < 1/100); rare (≥ 1/10,000, but < 1/1000); very rare (< 1/10,000). Based on data from clinical studies and post-marketing experience, the following side effects have been reported. The incidence of adverse events is presented in descending order of severity. Infections and infestations
Uncommon: urinary tract infection including cystitis, upper respiratory tract infection including pharyngitis and sinusitis;
Rare: sepsis including fatal outcome.

Sepsis
In one study in telmisartan arm an increased incidence of sepsis was observed with telmisartan compared with placebo. The event may be a chance finding or related to a mechanism currently not known.

Hypotension
This adverse reaction was reported as common in patients with controlled blood pressure who were treated with telmisartan for the reduction of cardiovascular morbidity on top of standard care.

In case of any adverse reactions, including those not specified in this patient’s leaflet, consult your healthcare provider.

If taking a larger dose than prescribed by your doctor, immediately contact specialists to provide timely medical care!

There is limited information available with regard to overdose in humans.

Symptoms: the most prominent manifestations of telmisartan overdose were hypotension and tachycardia; bradycardia dizziness, increase in serum creatinine, and acute renal failure have also been reported.

Management: telmisartan is not removed by haemodialysis. The patient should be closely monitored, and the treatment should be symptomatic and supportive. Management depends on the time since ingestion and the severity of the symptoms. Suggested measures include induction of emesis and/or gastric lavage. Activated charcoal may be useful. Serum electrolytes and creatinine should be monitored frequently. If hypotension occurs, the patient should be placed in a supine position, with salt and volume replacement given quickly.

Interactions with other medicines

Digoxin: When telmisartan was co-administered with digoxin, median increases in digoxin peak plasma concentration (49%) and in trough concentration (20%) were observed. When initiating, adjusting, and discontinuing telmisartan, monitor digoxin levels in order to maintain levels within the therapeutic range.

The occurrence of hyperkalaemia depends on associated risk factors. The risk is increased in case of the above-mentioned treatment combinations. The risk is particularly high in combination with potassium sparing-diuretics, and when combined with salt substitutes containing potassium. A combination with ACE inhibitors or NSAIDs, for example, presents a lesser risk provided that precautions for use are strictly followed.

Concomitant use not recommended
Potassium sparing diuretics or potassium supplements: angiotensin II receptor antagonists such as telmisartan, attenuate diuretic induced potassium loss. Potassium sparing diuretics e.g., spirinolactone, eplerenone, triamterene, or amiloride, potassium supplements, or potassium-containing salt substitutes may lead to a significant increase in serum potassium. If concomitant use is indicated because of documented hypokalaemia, they should be used with caution and with frequent monitoring of serum potassium.

Lithium: reversible increases in serum lithium concentrations and toxicity have been reported during concomitant administration of lithium with angiotensin converting enzyme inhibitors, and with angiotensin II receptor antagonists, including telmisartan. If use of the combination proves necessary, careful monitoring of serum lithium levels is recommended.

In some patients with compromised renal function (e.g., dehydrated patients or elderly patients with compromised renal function), the co-administration of angiotensin II receptor antagonists and agents that inhibit cyclo-oxygenase may result in further deterioration of renal function, including possible acute renal failure, which is usually reversible. Therefore, the combination should be administered with caution, especially in the elderly. Patients should be adequately hydrated and consideration should be given to monitoring of renal function after initiation of concomitant therapy and periodically thereafter.

The co-administration of telmisartan and ramipril led to an increase of up to 2.5-fold in the AUC0-24 and Cmax of ramipril and ramiprilat. The clinical relevance of this observation is not known.

Diuretics (thiazide or loop diuretics): prior treatment with high dose diuretics such as furosemide (loop diuretic) and hydrochlorothiazide (thiazide diuretic) may result in volume depletion, and in a risk of hypotension when initiating therapy with telmisartan.

Clinical trial data has shown that dual blockade of the renin-angiotensin-aldosterone-system (RAAS) through the combined use of ACE-inhibitors, angiotensin II receptor blockers or aliskiren is associated with a higher frequency of adverse events such as hypotension, hyperkalaemia and decreased renal function (including acute renal failure) compared to monotherapy.

Based on their pharmacological properties it can be expected that the following medicinal products may potentiate the hypotensive effects of all antihypertensives including telmisartan: baclofen, amifostine. Furthermore, orthostatic hypotension may be aggravated by alcohol, barbiturates, narcotics, or antidepressants.

Renovascular hypertension
There is an increased risk of severe hypotension and renal insufficiency when patients with bilateral renal artery stenosis or stenosis of the artery to a single functioning kidney are treated with medicinal products that affect the renin-angiotensin-aldosterone system.

ACE-inhibitors and angiotensin II receptor blockers should not be used concomitantly in patients with diabetic nephropathy.

Other conditions with stimulation of the renin-angiotensin-aldosterone system
In patients whose vascular tone and renal function depend predominantly on the activity of the renin-angiotensin-aldosterone system (e.g., patients with severe congestive heart failure or underlying renal disease, including renal artery stenosis), treatment with medicinal products that affect this system such as telmisartan has been associated with acute hypotension, hyperazotaemia, oliguria, or rarely acute renal failure.

Primary hyperaldosteronism
Patients with primary aldosteronism generally will not respond to antihypertensive medicinal products acting through inhibition of the renin-angiotensin system. Therefore, the use of Telmisartan-NAN is not recommended.

Hyperkalaemia
The use of medicinal products that affect the renin-angiotensin-aldosterone system may cause hyperkalaemia.

Before considering the concomitant use of medicinal products that affect the renin-angiotensin-aldosterone system, the benefit risk ratio should be evaluated.

The main risk factors for hyperkalaemia to be considered are:

Ethnic differences
As observed for angiotensin converting enzyme inhibitors, telmisartan and the other angiotensin II receptor antagonists are apparently less effective in lowering blood pressure in black people than in non-blacks, possibly because of higher prevalence of low-renin states in the black hypertensive population.

Other
As with any antihypertensive agent, excessive reduction of blood pressure in patients with ischaemic cardiopathy or ischaemic cardiovascular disease could result in a myocardial infarction or stroke.

If you have one of the diseases or conditions listed above, consult your healthcare provider before taking Telmisartan-NAN.

Administration during pregnancy or lactation

There are no adequate data from the use of telmisartan in pregnant women. Studies in animals have shown reproductive toxicity.

Epidemiological evidence regarding the risk of teratogenicity following exposure to ACE inhibitors during the first trimester of pregnancy has not been conclusive; however, a small increase in risk cannot be excluded. Whilst there is no controlled epidemiological data on the risk with angiotensin II receptor antagonists, similar risks may exist for this class of medications.
Unless continued telmisartan therapy is considered essential, patients planning pregnancy should be changed to alternative antihypertensive treatments which have an established safety profile for use in pregnancy.

When pregnancy is diagnosed, treatment with angiotensin II receptor antagonists (including Telmisartan-NAN) should be stopped immediately, and, if appropriate, alternative therapy should be started.

No studies on the effects of Telmisartan-NAN on the ability to drive and use machines have been performed. When driving vehicles or operating machinery it should be taken into account that dizziness or drowsiness may occasionally occur when taking antihypertensive therapy.

Protect from light and moisture, at a temperature not above 25°C.
Keep away from children.

2 years. Do not use after the expiration date indicated on the package. 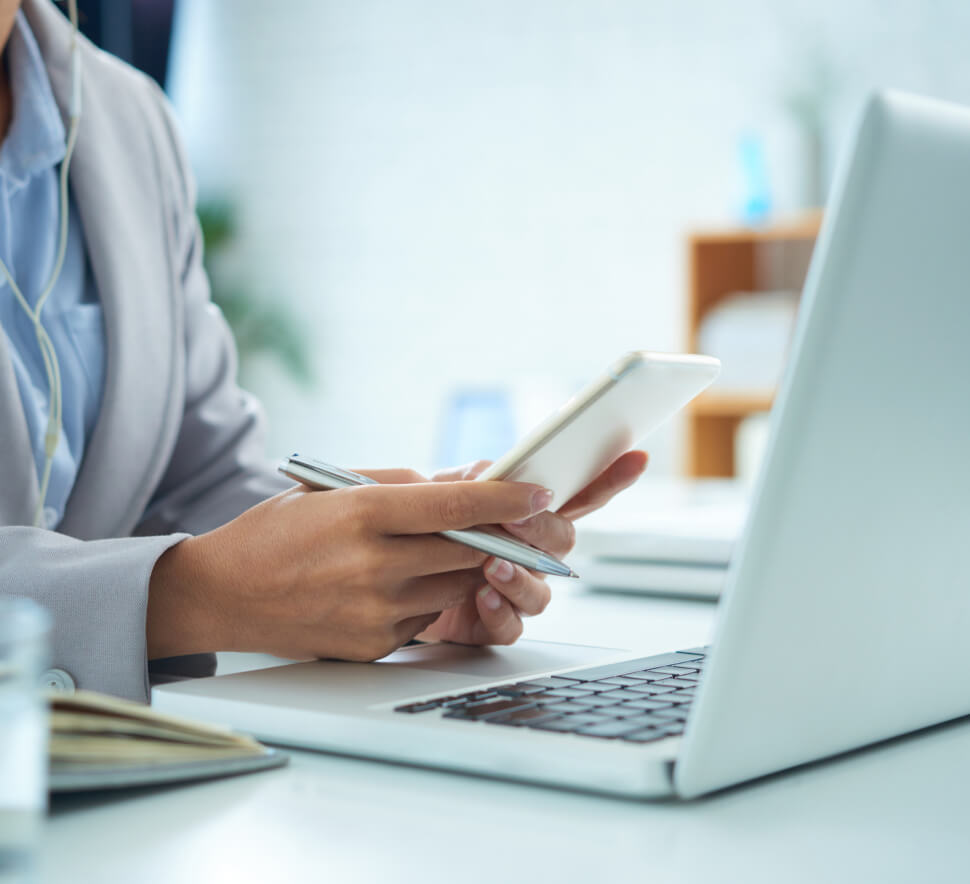